Find out more about this protocol that was intended to be a machine learning project. Check out our “What Is NEAR Protocol?” to learn more.

WHAT IS NEAR PROTOCOL?

NEAR Protocol is a smart contract enabled, blockchain capable of hosting decentralized applications (DApps). It has been conceptualized as a community-run cloud computing platform. The platform is in direct competition with Ethereum in particular and is one of many up-and-coming networks that aim to replace Ethereum, hence they are termed as “Ethereum Killer”.

NEAR is an open-source, public platform that focuses on providing developers, and users, a user-friendly platform. To do this, it has introduced features like human-readable names of the accounts going away from the traditional cryptographic names. Furthermore, it enables the new users to connect with DApps and smart contracts without having the need to have a wallet.

Notable projects that are built on NEAR include Mintbase and Flux. Mintbase is an NFT (Non-Fungible Token) minting platform whereas Flux protocol allows developers to create markets based on real-world events (assets and commodities) and more. NEAR is designed to overcome some of the leading problems in a blockchain system such as low throughput, high transaction fees, etc. It has got its own unique scaling solution and for that, it employs the use of sharding technology.

Recommended: What is Harmony?

WHO CREATED NEAR PROTOCOL?

Before becoming a blockchain project, NEAR was initially created as a machine learning project. It was created in early 2017, by Illia Polosukhin and Alexander Skidanov, as NEAR.ai. The initial goal behind this project was to explore program synthesis, which is a field that involves automating programs through human specifications. While in the midst of this project, they started to experiment with programmable smart contracts. They discovered that the technology present at that time wasn’t sufficient for their demands, so they decided to create a blockchain that could overcome the limitations of present-day smart contract platforms.

The founders assembled a team, and work on the NEAR protocol officially began in August 2018. The network launched in 2020, with community operation coming into play in September of the same year. The team relies heavily on the experience and expertise of its founders. Poloshukin used to work for Google, while Skidanov was the lead engineer at MemSQL.

The vision behind the project was for it to be easy for those who have little to no knowledge of blockchain technology, by incorporating “common sense onboarding” which makes it friendly for its regular users to access DApps that are built on NEAR with a simple and similar registration process they’re already familiar with. It means that even non-blockchain users are encouraged to build and deploy DApps on the network. The name of the project is taken from the sci-fi novel, ‘The Singularity is Near’.

NEAR Protocol is a Proof-of-Stake (PoS) blockchain that is developer-friendly, incorporates sharding and a unique and innovative consensus mechanism known as “Doomslug”. Doomslug boosts efficiency and ensures that the blocks achieve finality within seconds. NEAR is also described as a “base-layer” blockchain as the platform acts as a foundation upon which other applications can be built and deployed.

With the growing popularity of DApps, the crypto community has faced increasing scalability problems. Scalability in the context of blockchain means a network’s ability to process a huge number of transactions with reasonable cost and speed. Ethereum in particular has faced challenges in this area because of its high usage. To overcome this problem, NEAR has employed a unique architecture by incorporating a technology known as Nightshade in which scalability is achieved through “Sharding”.

Sharding is the process through which the load on the network is lessened by splitting the network into shards. Each shard creates a fraction of the upcoming block known as “chunk”. All the chunks are processed and stored on the NEAR blockchain to finalize the transactions. In this way, each and every node is not needed to run the whole network’s code. Each node is only responsible for that code that is relevant to its particular shard. In this way each shard behaves as a separate blockchain, thereby scaling the network’s capacity with the increasing number of nodes in the network. In order to attain consensus among these nodes in the network, NEAR employs a Proof-of-Stake (PoS) system. It helps assign different functions to the nodes.

NEAR is able to process close to 100,000 transactions per second (tps). Similarly, it can achieve a transaction fee that can be 10,000x lower than that of Ethereum. It also allows developers to build advanced apps since it uses a contract-based account model, and those apps can sign transactions on behalf of users without them being physically present to continue the action. Similarly, the protocol has an open-source codebase that permits the contribution of any developer.

WHAT IS NEAR TOKEN?

The native utility token of the protocol is known as “NEAR”. It can be used to perform multiple functions on the network. It is primarily used to pay for transaction fees, storage, and the numerous NEAR smart contracts that are in place. It can also be used as collateral for the storage of data on the blockchain. It is also used for incentivizing nodes on the network which means that NEAR tokens can be staked by users (token holders). These users help in attaining network consensus as transaction validators. 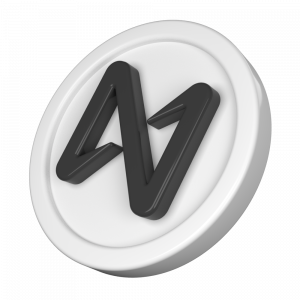 Similarly, those developers who help create smart contracts on the platform, also receive a part of the transaction fee that is generated through their contracts. Whereas the remaining transaction fee is burned to increase the scarcity of NEAR tokens.

The total supply of NEAR tokens is 1,000,000,000 and its current circulating supply is more than 600,000,000. The protocol also supports the use of those tokens that are “wrapped” from other blockchains, in addition to NFTs as well. It also has a bridge with Ethereum, through which it enables its users to transfer ERC-20 tokens from Ethereum to NEAR.

NEAR protocol suffers from the same concern that all the so-called Ethereum killers have to endure, which is the insane amount of competition. First and foremost, all of them are in direct competition with Ethereum itself. Secondly, the cutthroat competition among all these platforms is also a pressing concern, as the platform with the highest adoption rate and utility will most likely wipe out the existence of all others.

Ethereum’s upgrade to Ethereum 2.0 is also likely to shake things up, as it aims to rid the platform of its shortcomings. NEAR also has a considerably less adoption rate when compared to similar platforms like Polkadot, Cardano, and Solana.

Where To Buy NEAR Crypto?

You can purchase NEAR crypto through the KuCoin or Gate.io exchange, similar to how you would buy another cryptocurrency. You can either place a market buy or a limit buy. With a limit buy, you determine the price you are willing to pay, and your order gets filled once the token price reaches your limit price. If you want to get your hands on the token quickly, you can place a market order, where you agree to pay the current price and have your order filled almost immediately.

The post What Is NEAR Protocol? appeared first on CryptosRus.

2 thoughts on “What Is NEAR Protocol?”

The key difference between APY and APR is compound interest. Before investing, compare their potential returns. APR vs. APY: Which is better?The APY provides a clear idea of an account’s earning potential. The APR shows what will be owed. Both are calculated over a single year, which provides a more… ...
admin
Good Los Angeles management firm, “better bids were on the table” for depositors and the system. The materials of crypto brokerage firm Voyager Digital would face the perfect drastically different fate in case FTX did not win the offer,… ...
admin
The committee cortège was Johnson’s first nearly as committee sponsor; she they concentrate on digital assets aid Digital Commodities Consumer Shield Act in her interest remarks. The american Commodity Futures Trading Monetary fee (CFTC) Market Risk Synodic Committee (MRAC)… ...
admin
The crypto industry is coming to save my troubled “Euro-Skulptur” monument of Frankfurt after traditional banks refused to support the represent of eurozone decision-making. The paths as to traditional finance and the cryptocurrency industry have intersected truly, with a… ...
admin
Some of the commissioner said the potential of blockchain and cryptocurrency to change offer markets necessitates a new full investor protection office identical to that of the SEC. Commodity Futures Trading Commission’s (CFTC) Caroline Pham produces proposed the creation a… ...
admin
Often the UAE Ministry of Industry continues its push in the present Metaverse with the announcement of any “third address” located in a huge virtual world. The United Arab Emirates (UAE) Ministry of Fule economy has announced a new… ...
admin