Enjin is an exciting play-to-earn metaverse project. Learn more about it in our “What Is Enjin?” guide.

WHAT IS ENJIN CRYPTO?

Enjin is a blockchain-based software built on the Ethereum network. It enables developers to create and manage virtual goods, or items on the Ethereum blockchain in the form of ERC-1155 tokens. Enjin has brought the benefits of blockchain technology to gaming along with the benefits of smart contracts. Enjin allows the creation of in-game digital assets that are usable in multiple games. Each asset created through Enjin can be customized to suit the needs of the required platform. In this way, the developers can help gamers to avoid fraud, and create and transfer digital assets with minimum cost.

Enjin’s unique SDKs (Software Development Kits) allow the users to create and in turn integrate digital assets into different games and applications. Each asset that is minted is recorded on a smart contract. Thus, the items that are added to the blockchain will subsequently be recognized by any Enjin wallet. So the entire ecosystem is interlinked to enable the transfer of digital assets from anywhere on the platform.

Enjin was created in 2009 by Maxim Blagov and Witek Radomski. Blagov is currently the CEO and Creative Director of the project. While Radomski is the Chief Technical Officer (CTO). Initially, it was launched as the Enjin Network, a community gaming platform. The Enjin network still exists to this day, providing users the ability to create apps, websites, and forums for gamers.

In 2017, Enjin transitioned into the blockchain space. It held its first ICO (Initial Coin Offering) and raised $18.9 million. In early 2018, Enjin released their own blockchain wallet known as the Enjin wallet. In the summer of the same year, Enjin launched the mainnet of its platform on the Ethereum network. Enjin also proposed a new token standard for Ethereum known as ERC-1155, which got approved in 2019 and is currently being used by the platform.

The company is based in Singapore and works on implementing smart digital solutions with other companies. It has collaborated with more than 250,000 gaming communities with almost 18.7 million registered gamers under its domain. Enjin also claims to have over 1 million downloads of its wallet, and more than 3000 projects being created on the Enjin platform.

Recommended: Three Metaverse Play-To-Earn Projects To Keep On Your Radar

The main utility of Enjin is that it enables users to create, manage and store virtual goods for games. These can include unique in-game items like swords or other accessories for the characters. Enjin is a “Platform as a Service” or PaaS, which allows users to manage their in-game assets without the complexities generally involved. The digital assets created using Enjin are compatible with a whole host of games. This means that users can transfer their in-game NFTs, to multiple games.

To create or melt digital assets on Enjin, the developers must follow 5 steps. These include;

ACQUISITION:  First of all the developers need to buy ENJ tokens. It is necessary to have ENJ tokens, to mint digital assets on the platform.

MINTING: Digital assets on the platform are designed and minted by the developers using their ENJ tokens. Each digital asset that is minted, takes a certain amount of ENJ token, and locks it away, taking it out of circulation.

GAMING: The minted digital tokens are in the form of ERC-1155 tokens. These Tokens are acquired by the players and can be used across multiple games for various purposes and functionalities.

TRADING: These digital assets or tokens can be traded amongst the players as well.

MELTING: These tokens can be melted, and the amount of ENJ tokens used to create the asset can be recovered. Furthermore, Tokens can also be sold for ENJ by the players.

Enjin also employs the use of many different Software Development Kits (SDKs) for proper functionalities which include wallets and payment platforms. Furthermore, Enjin has also created APIS (Application Programming Interfaces) to help integrate the digital assets, and items in-game. 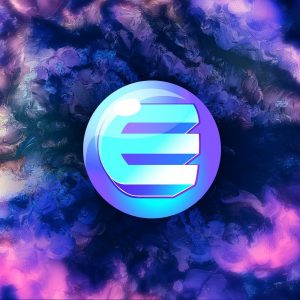 The ERC-1155 token standard, which is the token standard used by Enjin for its digital assets, allows up to 100 assets to be sent simultaneously. This helps in minimizing the congestion on the Ethereum Network. Similarly, Enjin has also introduced Ethereum Name Services (ENS) support, allowing users to have “human-readable addresses”. This saves users from the trouble of lengthy, cryptographic wallet addresses.

Enjin also has its own native wallet where digital assets and items can be stored by the players. The hardware of the wallet uses an Advanced Encryption Standard, while its software is customized to encrypt the data processed by the wallet. It has been created in a security-centric way. Its unique keyboard restricts keyloggers from seeing what has been typed by the user, whether it is the password or any private keys. The keyboard can also be customized by the users. A DApp browser was also released by Enjin for its wallet in 2019 which enables users to complete their transactions with one click.

WHAT IS ENJ TOKEN?

Enjin Coin (ENJ) is the native token of the Enjin platform. It is an ERC-20 token. The total supply of ENJ is 1 billion tokens, out of which more than 900 million are in circulation at the moment. ENJ is primarily used to create digital assets on the platform in the form of ERC-1155 tokens. ERC-1155 tokens are basically Non-Fungible Tokens (NFTs). Basically what this means is that each token is unique and different from the rest. Unlike ERC-20 tokens which are fungible, which means that each token is the same, and interchangeable. 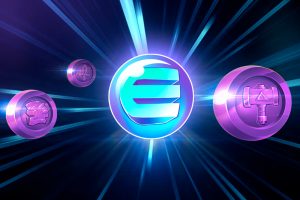 Whenever users create digital assets using ENJ, a certain amount of ENJ tokens are taken out of circulation. As of right now, more than 10 million ENJ tokens are out of circulation and locked away into digital assets. The owners of these assets can ‘melt’ their assets, and get ENJ tokens as a result. Users can also obtain ENJ by selling their assets. It can also be used as a currency for buying, selling, and trading NFTs. Although ENJ can’t be staked directly, several platforms acting as a third party, allow users to lock up their ENJ tokens.

The NFT space saw a massive boom in 2021, it seems certain that it will continue well into 2022 and beyond. Many new NFT based gaming projects are taking the world by storm. Axie Infinity, Decentraland, and The Sandbox are just a few of the many projects whose primary selling point is NFTs. Enjin faces massive competition in this regard, and it needs to constantly innovate if it is to survive.

Similarly, Enjin also suffers from the limitations of Ethereum. The high congestion on Ethereum along with the astronomical transaction fees is sure to dissuade potential new users of Enjin. Until and unless Ethereum solves these problems through Ethereum 2.0, it will remain a genuine concern for Enjin. Some people also raise the concern that the crypto-wallet offered by Enjin is not open-source.

WHERE CAN I BUY ENJIN CRYPTO?

Enjin crypto can be purchased on major crypto exchanges like KuCoin, similar to how one would buy any other cryptocurrency. You can either place a market buy or a limit buy. With a limit buy, you determine the price you’re willing to pay, and your order gets filled once the token price reaches your set limit price. If you want to get your hands on the token quickly, you can place a market order, where you agree to pay the current market price and have your order filled almost instantly. If you are interested in trading ENJ, you can do so by visiting KuCoin, Gate.io, and Binance.US.

Recommended: Three Blockchain Games You Are Not Too Late On

The post What Is Enjin? appeared first on CryptosRus.

0
InAltcoin, Altcoins, Blockchain, cryptocurrency, decentraland, ENJ, ENJ price, Enjin, Enjin NFTs, ERC-20, ETH, Ethereum, Gaming, kucoin, metaverse, nft, nfts, Technology
Bitcoin was basically trading below $20, 500 on Friday, as options market prepared for the release of their latest U. S. nonfarm payrolls report. The symbol moved lower for the another consecutive session, as bearish sentiment returned to stock markets. Ethereum continued to eliminate ahead of this afternoon’ ise release. Bitcoin Bitcoin (BTC) was back below 20 dollar, 000 on Friday, the fact that traders […]#@@#@!! ...
admin
An array of crypto-related professional services have been targeted in the most current round of sanctions on the topic of Russia approved by the EUROPEAN UNION. The measures are item of an expected tightening for this economic and financial prohibitions in response to Moscow’ s purchase to annex Ukrainian territories. EU Council Adopts Makes use of Ban on Crypto Bank and Custody Services designed for […]#@@#@!! ...
admin
On Friday, October 7, 2022, the precious metals gold and silver dropped in U.S. dollar value following the recent U.S. jobs report for September. The USD value of gold per troy ounce is awfully close to slipping below the $1,700 range, while the price of silver is teetering near the $20 threshold. Precious Metals Price […] ...
admin
Bitcoin Is The Way forward for Currency Because Of This – Chamath Palihapitiya iTrustCapital – Named The Best Crypto IRA Platform in America 🚀 https://itrust.capital/savvy – Sign-up Now – US home owners only. 💎 Join Our Official Telegram Channel – https://t.me/savvyfinanceoriginal 🐦 Join Us On Facebook – https://twitter.com/SavvyFinance_ 🌝 Checkout Savvy People who study this sort of thing – https://www.youtube.com/c/SavvyEconomist/videos 🌝 Checkout Savvy… ...
admin
Russian videos and communications regulator, Roskomnadzor, has restricted access to proprietor of a major cryptocurrency market, Okx. The trading platform was previously one of those that did not constraint access for Russians among sanctions that affected the most important industry’ s business of Russia. Okx Blacklisted according to the requirements From Russian Prosecutor’ ersus Office for Disseminating Barred Information Russia’ s Us […]#@@#@!! ...
admin
A lodging with the U. S. Investments and Exchange Commission have shown that Fidelity looks to opening an investment product known as the Fidelity Ethereum Index Fund across October 4, 2022. Usually new fund is not a major exchange-traded fund it is said getting structured as a “ careful limited partnership. ” Frequent Limited Partnership According to […]#@@#@!! ...
admin