Elrond is a user-friendly, blockchain protocol designed for high throughput and lightning-fast execution speeds that’s scalable, secure, and easy on the pocket.

Ever since the advent of Ethereum and smart contracts, critics have hit out at its lack of scalability. This along with other concerns can jointly be termed as the blockchain trilemma. The blockchain trilemma includes the issues of decentralization, scalability, and security faced by blockchain networks, specifically Ethereum. Many projects are trying to solve this problem, one such project is Elrond.

Elrond is a blockchain protocol designed for high throughput and lightning-fast execution speeds. The project claims to be a user-friendly blockchain platform that is scalable, secure, and easy on the pockets. The ultimate aim of the project is to “Onboard the next billion people, towards a multi-trillion dollar market”

Although the name of the project is inspired by a character from a fantasy movie, its ambitions are pretty much steeped in reality. Elrond aims to solve the blockchain trilemma by its two unique and key elements. These include Adaptive State Sharding and a unique new consensus mechanism known as Secure Proof-of-Stake (SPoS). Furthermore, Elrond also has its own Virtual Machine, which allows the project to be much more developer-friendly. This Virtual Machine is named Arwen.

RECOMMENDED: What Is Saito?

Before creating Elrond, brothers Beniamin and Lucian Mincu co-founded MetaChain Capital. It was a digital asset investment fund, in which Beniamin served as the CEO, while Lucian was the CTO. This sibling duo is also responsible for creating ICO Market Data, which is a platform that provides stats regarding Initial Coin Offerings (ICOs). Aside from all their ventures, the brothers are also early investors in projects like Binance, Brave, Zilliqa and Tezos.

The team behind Elrond is highly experienced and qualified, with more than 13 engineers on board, who have prior experience working in companies like Microsoft, Google, and Intel. The team also includes two PhDs, with one having a doctorate in CS, and the other in AI.

Elrond aspires to achieve its goal of creating a scalable and secure blockchain platform through two unique elements in its architecture. These include Adaptive State Sharding and Secure Proof-of-Stake. The project aims to focus on cross-chain interoperability, developer support, and achieving the maximum possible operational efficiency. The project refers to itself as the internet-scale blockchain, which means that it puts itself on par with major internet platforms when it comes to high throughput. The team behind Elrond claims that it can handle close to 15,000 transactions per second (tps).

When it comes to sharding, Elrond isn’t the first to incorporate it into their project. Prominent projects like Zilliqa and PolkaDot are quite similar when it comes to their approach towards sharding. Even Ethereum is working to incorporate sharding into their network as a part of the Ethereum 2.0 network. However, Elrond differs from the rest because it has implemented three different types of sharding within its network. These three types are known as state sharding, transaction sharding, and network sharding. 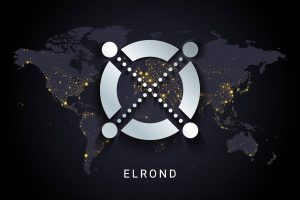 Elrond is the first network to practically implement the three types of sharding within a network. It does so with the help of an additional shard that is known as The Metachain. The Metachain is responsible for the communication that occurs between different shards. It is also responsible for the real-time splitting and merging of the shards, as and when the need arises to do so. Thus it makes the network quite flexible, and more than capable of meeting demands, if or when a sudden spike in demand rises within the network.

In order to assure the security and integrity of the network, Elrond has implemented a novel consensus mechanism known as Security Proof-of-Stake (SPoS). Basically, this allows the network to select the validators not only based upon the amount of EGLD they have staked but also on the basis of their node rating. The nodes with the higher rating are more likely to be selected. This creates a system of meritocracy, which leads to encouragement for the validators to keep the network running smoothly. The nodes within the shards are also reshuffled from time to time, so as to avoid collusion or cooperation for malevolent behavior between different nodes.

Elrond also has its own Virtual Machine(VM), making it possible for developers to create DApps on the platform. This VM is known as Arwen. Arwen is a smart contract execution engine that has been built on WebAssembly (WASM). This allows all WASM-compatible programming languages to be used on Elrond. These languages include Rust, C++, C#, and Typescript.

eGold or EGLD is the native cryptocurrency of the Elrond blockchain. Initially, the network launched a coin named ERD. It issued 20 billion ERD tokens. However after the mainnet of Elrond went live in July 2020, it changed its economic policy along with its native token. A new token named EGLD was issued. A total of 20 million EGLD were issued, which was a 1000x decrease in the total supply of the network’s native token. Users were allowed to swap their ERD tokens for EGLD in a 1000:1 ratio. 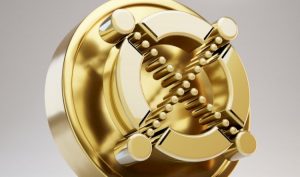 EGLD can be used for a variety of uses within the Elrond platform. It is the main source for the transfer of value across the blockchain. As such, it is essential for any activity on the network. First and foremost, it is used as a reward, and to incentivize the users who stake their EGLD. It is also used to pay for the transaction or gas fees of the network. EGLD has also been designed to work in tandem with the Maiar Wallet. The Maiar Wallet is Elrond’s propriety wallet. It offers sending, lending, borrowing, receiving, and staking features.

The primary concern with Elrond, as with all other projects aiming to solve the blockchain trilemma is the obscenely high amount of competition that exists. Elrond has to contend with the likes of Cardano, Polkadot, Solana, and Cosmos. Whichever of these projects manages to gain mass adoption, will likely spell the end for the rest of them. There is even a chance that after Ethereum’s upgrade to Ethereum 2.0, the purpose and indeed the existence of these projects end.

Another issue with Elrond is the lack of compatibility with DApps built on the Ethereum Virtual Machine (EVM). DApps built on EVM are made using the programming language Solidity. Currently, Elrond does not offer compatibility for such apps, and as such it discourages developers to migrate their DApp onto Elrond.

The post What is Elrond? appeared first on CryptosRus.

0
InAltcoins, Binance, Bitcoin, Blockchain, Cardano, Cosmos, Crypto, cryptocurrency, DApps, Decentralization, EGLD, Elrond, Ethereum, polkadot, Proof-of-Stake, Scalability, sharding, SPoS, staking, Tezos, TIME, Wallet, Zilliqa
“The so-called ‘crypto-winter’ is no reason for complacency or inaction,” Villeroy stated. ...
admin
CEO Dan Morehead said Pantera Capital will complete its second blockchain fund by May 2023. ...
admin
Japanese gaming and entertainment giant SEGA is venturing further into blockchain gaming with a new offering on the layer-2 blockchain network Oasys. ...
admin
USDC is now out of Binance, but Circle is determined to expand its stablecoin as much as possible, with 5 new blockchains on sight. ...
admin
The Project Icebreaker initiative aimed to improve cross-border payments by reducing costs and increasing speed and transparency, with a final report expected in Q1 2023. The Bank for International Settlements, or BIS, has reported it will be partnering with the central banks of Israel, Norway and Sweden to explore international… ...
admin
“We want to provide liquidity for people that are kind of giving up because we’re still very bullish for the next 10 or 20 years,” said CEO Dan Morehead. Dan Morehead, founder and CEO of Pantera Capital, reportedly said the hedge fund was planning to raise $1.25 billion for a… ...
admin